In 2007, my first book was published. Horses, as I fondly refer to it (and as it happens to be titled), was one of several books I edited during my tenure at Hylas Publishing. Others included the perennial favorite Sex Masters and The Wisdom of Penguins. Luckily, those two books already had a brand associated with them, so they don’t bear my name and don’t come up when you me. (Although, perhaps almost worse than having Sex Masters come up under your name is having one of your parents’ friends insist on calling you “Ms. Foxx” every time he sees you. Thanks, terrible pen-name.)


Work on these books primarily involved finding facts (or sexual positions) and rewriting them, before strategically pairing them with quotes and photos you’d found at stockhouses (or which were taken specifically for the book by a couple who had broken up before their contract with us was done). Then, production worked its magic, and a few months after I’d left the job assuming my name wasn’t going on anything, I saw a copy of Horses on Amazon. It doesn't usually bother me that I had so little control over the book my name graces (although reading about Cooks Source and James Frey's writing factory made me super paranoid for a few days), and I alternate between finding it sort of funny and reminding myself that plenty of other writers wrote newspaper articles and Duran Duran biographies before they could write what they wanted. And I also take great pride in the fact that it received a positive review. 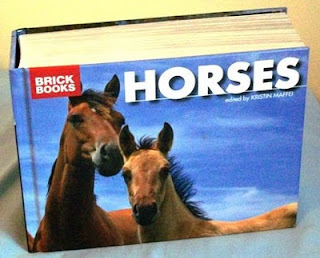 And that’s how I published a book.