I was thrilled to hear last month that Hot Metal Bridge had accepted my poem, "The Museum of Everything Salty" for their magazine. Run out of the MFA program at the University of Pittsburgh, Hot Metal Bridge publishes two issues annually and in the past, they have published work by Russell Banks, Tom Perotta, Maxine Hong Kingston, Dan Chaon, Michelle Wildgen, Ewa Chrusciel, Charles Baxter, Sherman Alexie, Sherrie Flick, Rodrigo Toscano, and Don Lee. But, as their website says and my acceptance shows, they also maintain an emphasis on finding new material from emerging and previously unpublished writers.  I'm so excited to be included in their Fall 2013 issue, "Sight and Suspension." 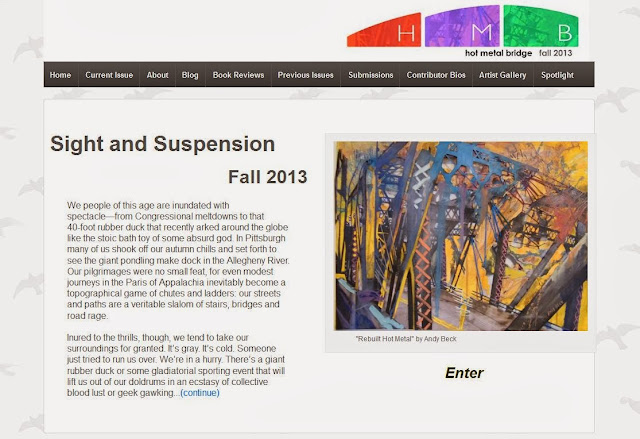 The poem is part of a series I've been writing on the Museum of Myself, a place that holds my autobiography through the five senses and other ephemera.  "Naturhistoriches" is also part of this series.  I hope you'll head on over to Hot Metal Bridge and check it out, along with the other great work that is up there now!