When I found Phantom Kangaroo last year, I was instantly enamored with Claudia Lamar's creation.  Their description of the magazine and the poems within it is so much better than any I can come up with, so I'm just going to reproduce it in full here: 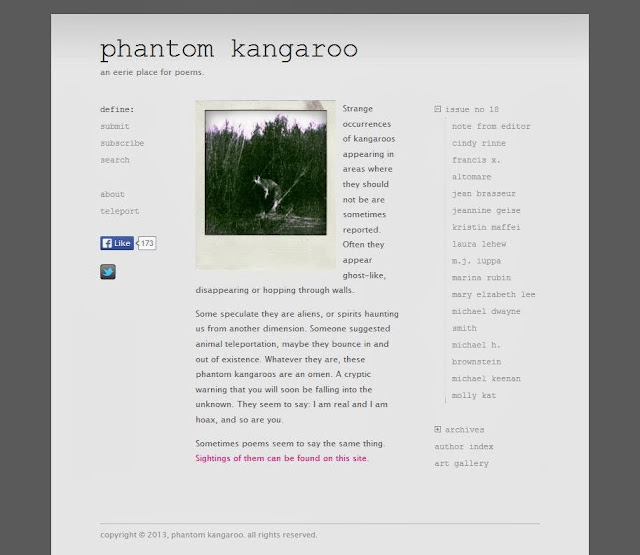 Doesn't that make you want to read every single thing they publish? I'm lucky enough to have a poem published in Issue 18, and I hope you'll give it a read.  "Murder Poem" started as an extensive and exhaustive five-page piece, written during a class I took with Rachel Zucker on the long poem.  The form finally allowed me to get everything out - my intense fear of being murdered, anxiety dreams I've had since I was a child, and a violence that seems to intrinsically underlie heterosexual relationships - into one poem.  I felt liberated with the form, and took on a number of similarly epic topics. Workshopping it the following semester, though, it became clear that the poem was too much, and because of how exhaustive it was, it wasn't being effective in the way I needed it to be.  With a lot of deep editing, it became clear that it was really a sonnet, and a sonnet it stayed.  It still gets at all the same things, but in a much cleaner format, and I hope that makes it a much more effective piece.

And, if you're interested, tomorrow at 10pm, they'll be hosting a reading with poets from Issue 18 and their archives.  Tune in on their Google+ page!
Posted by Kristin at 9:00 AM