Ephemera from the Museum of Myself - Cigarette Machine

I saw this cigarette machine at the Mad Men exhibit at the Museum of the Moving Image a few weeks ago, and I was instantly transported back to the last time I saw a working cigarette machine in real life, and not in a museum or antiques store. 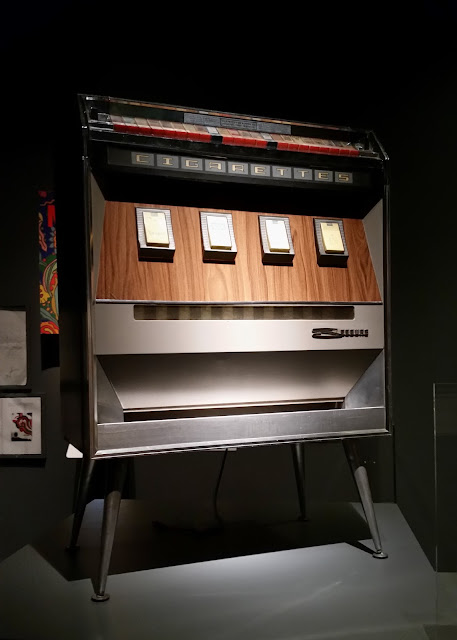 I was in eighth grade in 2000, and we were on an overnight class trip to Washington, DC. We stopped in at some restaurant, and there it was, in the opening lobby of the restaurant. Some stupid kids tried to buy cigarettes from it before getting caught by a chaperon, and I remember realizing at that moment, why they were getting phased out. A vending machine can't check your ID and make sure you're old enough to buy cigarettes. It was so simple, all along. I was a pretty stupid kid, too.

I only remembered it because by 2000, it was still so very rare to see a cigarette machine, though I knew what it was, because they must have been much more popular when I was little, in the 90s. I didn't exactly know it was the last time I'd ever see one, but maybe I had a hunch. I looked for them in Wyoming and Texas and Colorado when I was visiting them the last couple years, because cigarette machines seemed to be a western sort of thing, but never found one. I guess I probably never will again.

It reminds me of an essay on September 11th that I'd thought I'd lost. I've lost a few essays on September 11th. For some reason, they stick in my heart and my brain, but I can't find them again. The one that was an open letter from the child of a Challenger explosion victim, talking about public loss vs public loss. And this one, the one that remembered "It was your last ride in a Checker cab, and you had no warning." I found it, this morning, after nearly an hour of searching, and you should read it. It's still one of the most apt pieces on New York, and on life post-9/11, that I've ever read. It's "The Way We Live Now: 11-11-01" by Colson Whitehead.
Posted by Kristin at 12:17 PM